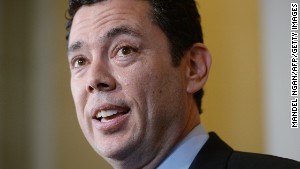 Former Utah Republican Rep. Jason Chaffetz posted a photo of himself Thursday with a wooden Native American statue in an attempt to mock Massachusetts Democratic Sen. Elizabeth Warren. "At Disneyland today with Senator Elizabeth Warren," Chaffetz, now a Fox News contributor, wrote in a post on Twitter and Instagram. With Thursday's posts, Chaffetz echoed President Donald Trump in mocking Warren amid renewed attention over her claims of Native American heritage. Warren released the results of a DNA analysis on Monday showing she has distant Native American ancestry. Trump dismissed the results and brought back his "Pocahontas" nickname to ridicule her. Cherokee Nation Secretary of State Chuck Hoskin Jr. said in a statement, "Using a DNA test to lay claim to any connection to the Cherokee Nation or any tribal nation, even vaguely, is inappropriate and wrong." South Carolina Republican Sen. Lindsey Graham joined Trump in ribbing Warren over the test, saying on Fox News that he would take a DNA test himself. He predicted he would "beat" Warren at being Native American and quipped that a hypothetical result showing him having Iranian heritage would be "terrible" -- a remark he later called a joke directed at Ayatollah Ali Khamenei. A raft of tech industry leaders with Iranian heritage called on Graham to apologize.